The EVO-STIK League have announced Bowland Brewery as the leagues official suppliers of cask beer.

Unveiled last weekend before the Northern Premier League’s AGM and end of season awards night after signing a two year deal to sponsor new monthly player and manager awards, the traditional brewers are hoping supporters will start seeking out new official cask ale Hen Harrier whenever their clubs are in action next season after starting on Sunday when England take on Panama.

Club delegates who attended last Saturday's annual showcase for the EVO-STIK League’s sponsors and commercial partners at Blackpool’s Hilton Hotel already know all about the range of authentic British cask beers produced by the Clitheroe-based brewers after leaving for home with multiple cases of Hen Harrier for their first award winners of the season.

With a ‘Player of the Month’ from every club and the three stand-out divisional managers to be rewarded, the EVO-STIK League’s latest commercial partners will hand over nearly six hundred cases and thousands of bottles of Hen Harrier as prizes next term. 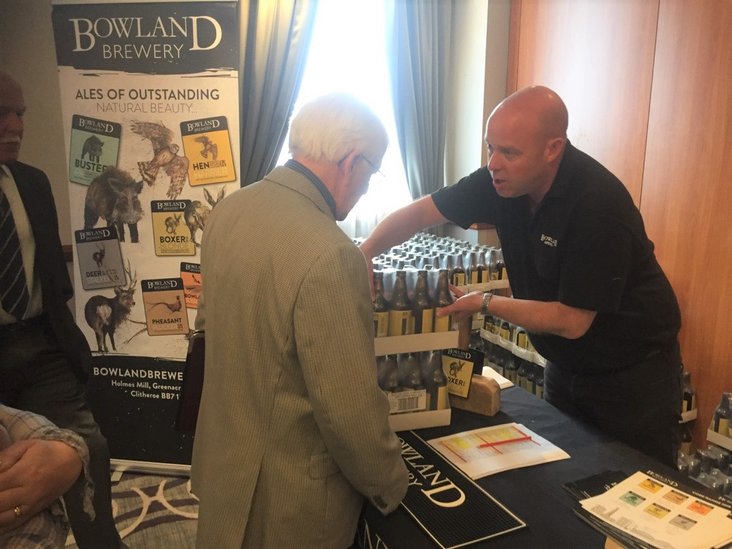 The sponsor's expert staff will also be on hand as official suppliers to offer advice to member clubs on setting up bars, pricing and events on an individual basis, at regional meetings and via newsletters and information packs.

And the brewers are no strangers to football with a range of beers already on sale at a number of Football League and Premier League clubs including Accrington Stanley and Burnley. At the latter, they even have a bus parked in the fan park on matchdays as a mobile bar!

Bowland Brewery’s managing director Warren Bennett is hoping they’ll soon enjoy the same popularity with the EVO-STIK League’s fans, players and officials after bringing along another mobile bar to the showcase for clubs to enjoy a tasting session of contemporary craft beers while they collected their Hen Harrier stocks.

Pictured handing them over to one happy club official, Bennett confirmed: “Sponsoring the EVO-STIK League provides us with a fabulous opportunity to support and reward passionate community clubs and to introduce our ales to a whole new audience. The winning ‘Manager of the Month’ in each division and ‘Player of the Month’ at every club will win a case of Hen Harrier, a lovely golden ale with soft citrus and peach flavours intertwined.”